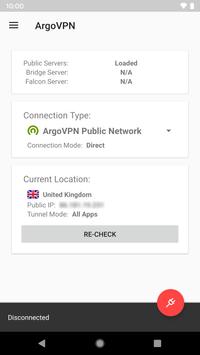 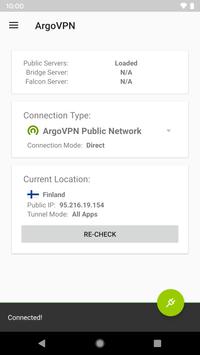 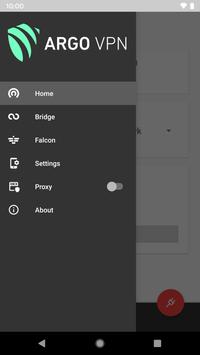 Argo VPN is a new tool to bypass Iran’s Internet censorship which is designed and developed by the Filtershekanha team. Argo VPN has several key features such as Falcon and Bridges. With Falcon, you can register and add your own domain name to be used in Argo VPN for bypassing Internet censorship in the country. There is another feature called “Argo VPN Bridge” which you can connect to the Argo VPN server through some non-public addresses.

The Filtershekanha team has added different features to Argo VPN that are usually only available in commercial VPNs. For example, Argo VPN has a built-in firewall that allows you to block certain websites, so those addresses will remain blocked as long as you are connected to Argo VPN’s servers. Also, we have a public repository that allows users to block phishing and malware websites on the Argo VPN connection. This repository will be updated by Argo VPN’s community and will help Argo VPN’s users to improve their safety on the Internet. Argo VPN also allows users to use “Cloud flare Family” and Cloud flare Malware, so you can have both benefits of “Argo VPN Firewall” and “Cloud flare Family” at the same time.

Argo VPN is also capable of excluding specific URLs. For example, you can exclude the download websites, which are not blocked, in the “exceptions” list. This feature ensures when you are connected to the Internet through Argo VPN, the specified website’s traffic will not pass via Argo VPN’s tunnel.

DNS server, DNS leak prevention, Kill-Switch (STILL IN BETA STAGE), excluding particular apps from Argo VPN’s tunnel are other features that have been provided in Argo VPN. We will add more features to Argo VPN in the future according to users’ feedback.

But the most important feature of Argo VPN is its security and respecting user’s privacy. After connecting to Argo VPN, your connection is encrypted using AES-GCM-128 OR ChaCha20-Poly1305 ciphers. The choice of the cipher is made automatically based on your smartphone’s processor architecture so that the highest Internet speed possible for accessing online services is provided to you. After each connection, your connection’s encryption key will be randomly generated (which is different from your last connection). This is done with the use of our exclusive protocol called Argo Authenticator.

This protocol is designed by The Filtershekanha team with the goal of endpoint server authentication and secure & fast encryption key exchange between the client and server.

Argo VPN was reviewed in two iterations by Cure53, first in February 2020, and then in April 2020. The reviews and audits conducted by Cure53 specifically targeted the security and privacy aspects of the software.

Download ST Selfcare The Description of ST Selfcare The application offers the accompanying administrations: 1-Inquiry about solicitations. 2 – Query the accessibility of [...] Download Netflix Free APK   The description of Netflix Netflix is the world’s driving membership administration for sitting in front of the [...] Download 2ndLine Second Phone Number The description of 2ndLine 2ndLine is a subsequent US or Canada telephone number that takes a [...]

More than 100,000,000 people chose Snap Tube to download videos and music for free to enjoy their favorite content [...]

You are downloading SuperSU APK v2.76 (276). SuperSU is that the Superuser access management tool of the longer term. [...]