Sheri Lewis, 59, of Seattle, needed a hip transplant. Bradley Fuller, 63, of nearby Kirkland, needed chemotherapy and radiation when the pain in his jaw turned out to be throat cancer. And Kim Bruzas, 55, of Waitsburg, hundreds of miles away, needed emergency care to stop sudden —and severe — rectal bleeding.

Each of these Washington state residents required medical treatment during the past few years, and each thought they had purchased health insurance through an online site.

But when it was time to pay the bills, they learned that the products they bought through Aliera Healthcare Inc. weren’t insurance at all — and that the cost of their care wasn’t covered.

Lewis and the others had enrolled in what Aliera officials claimed was a health care sharing ministry (HCSM) — faith-based co-ops in which members agree to pay one another’s medical bills.

But Washington insurance officials this week said the firm doesn’t meet the definition of a sharing ministry and described Aliera’s products as a “sham” aimed at misleading consumers. Other states, including Texas and New Hampshire, are poised to take similar action.

Aliera falsely represented itself as a sharing ministry, which would be exempt from insurance regulations, an investigation found. Though he wouldn’t name them, Kreidler said he’s investigating two additional firms over similar concerns.

“They don’t have the direct affiliation with a particular religious group, a church, a pastor,” Kreidler said. “These appear to be ones that come in with an opportunity here to make money.”

In a statement, Aliera officials disputed Kreidler’s conclusions. The company has 90 days to request a hearing.

“Aliera has never misled consumer and sales agents about its health plans,” the statement said. “For example, our website, marketing materials and other communications clearly state that Trinity’s health sharing products are not insurance. Most importantly, they have never been represented as insurance.”

The Washington order followed complaints from nearly two dozen people, including Lewis, a dance teacher who was told her planned hip surgery wouldn’t be covered.

Texas insurance officials have scheduled a hearing to consider a similar order against Aliera, which has 100,000 members nationwide and reported revenue of $180 million in 2018, documents showed.

Aliera is operated by Shelley Steele of Marietta, Ga., and her husband, Timothy Moses, who was convicted in 2006 of federal securities fraud and perjury. He was sentenced to 6½ years in prison and ordered to repay more than $1 million to victims.

Nationwide, nearly 1 million people are enrolled in more than 100 sharing ministries in at least 29 states, according to the Alliance of Health Care Sharing Ministries. But that’s just an estimate, said James Lansberry, executive vice president of Samaritan Ministries International of Peoria, Ill. No comprehensive data is available.

“We try to track what’s going on out there,” Lansberry said. “Anyone claiming to be a health care sharing ministry could spill over onto our reputation.”

Samaritan is among what have been the three top players in the sharing ministries field. The oldest, founded in 1993, is the Medi-Share program of Melbourne, Fla., operated by Christian Care Ministry. The third is Christian Healthcare Ministries of Barberton, Ohio. All are explicitly religious and emphasize faith as the basis for members to share medical burdens.

Those groups originally were certified by the Centers for Medicare & Medicaid Services and required to meet specific criteria. Consumers who enrolled were shielded from the Affordable Care Act’s individual mandate that required they show proof of insurance or pay a fine.

But CMS no longer certifies HCSMs and, since Congress zeroed out the mandate’s penalty in 2017, a new crop of companies, including Aliera, has sprung up. That worries some of the traditional ministries.

“HCSMs must operate with integrity, transparency, full compliance with the law, and enforcement of the law,” officials with Medi-Share, which has 415,000 members nationwide, said in a statement. “Anything outside of that violates the true spirit of the HCSM community.”

Many of these entities mimic the marketing, structure and language of ACA-compliant health insurance plans — but offer none of the protections, said JoAnn Volk and Justin Giovannelli, researchers at the Georgetown University Center on Health Insurance Reforms, who wrote about the issue last summer.

“The way they advertise and the services they are providing, it sounds a heck of a lot like health insurance,” Giovannelli said. “They’re letting folks believe they have a product that has a promise to pay.” 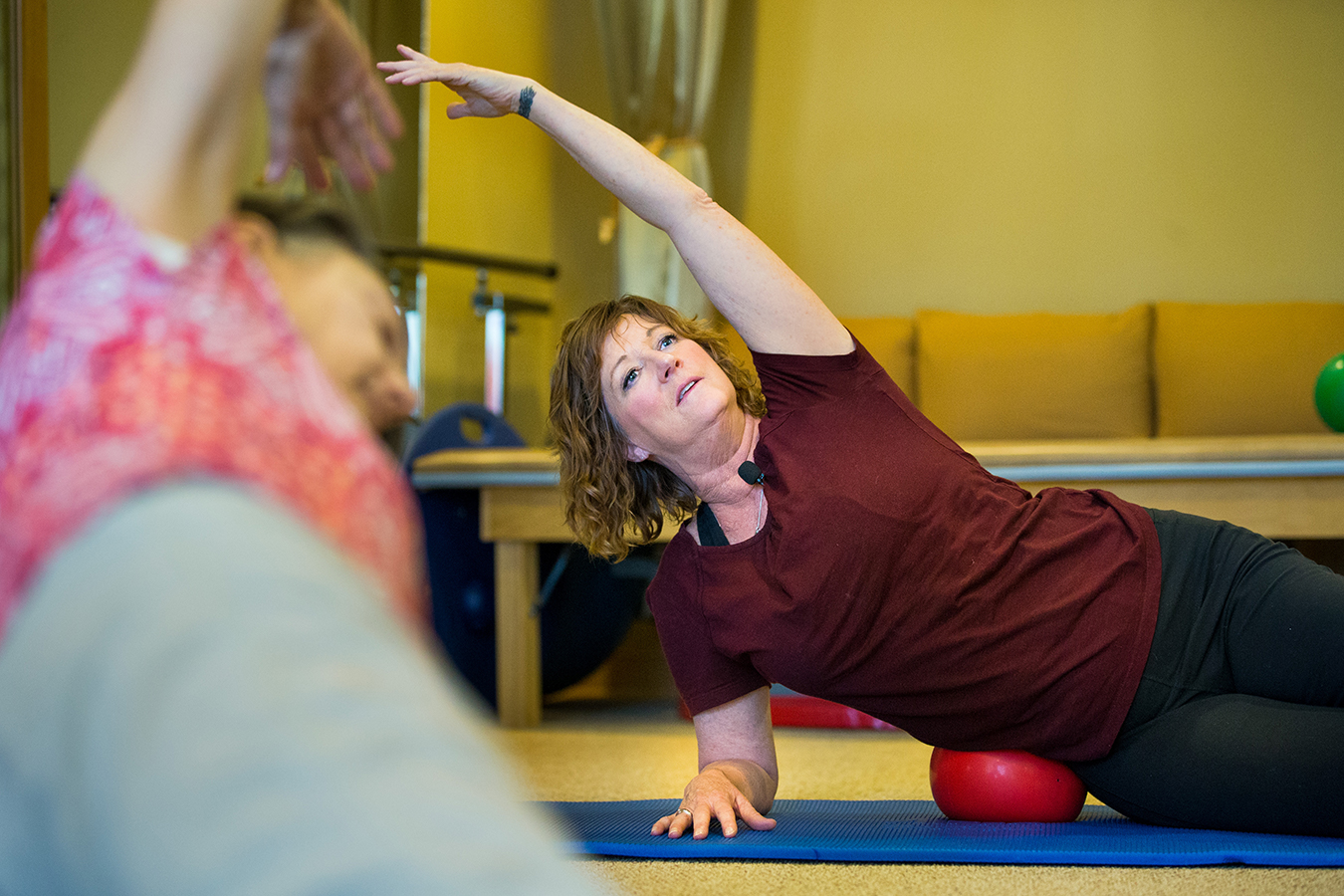 Sheri Lewis teaches a body-rolling class at Balance Physical Therapy in Issaquah, Wash. Lewis, who was enrolled in a health care sharing ministry, found out that the hip transplant she desperately needed was not covered. She got the procedure in Tijuana, Mexico, with the help of a GoFundMe account.(Dan DeLong for KHN)

“It looked like Aliera was health insurance to me,” she said.

When Aliera denied her surgery, she had to resort to a GoFundMe site organized by friends to raise nearly $13,000 and then travel to Tijuana, Mexico, to get a hip transplant she could afford.

Fuller, who was diagnosed with throat cancer, said he was stuck with $81,000 in bills for his first month of treatment.

“They started checking my insurance and it didn’t cover nothing,” said the retired commercial electrician.

Fuller, his voice still raspy after radiation, said he had insurance through his union for years, but when the premiums spiked, he went online to find something else.

The person he talked to from Aliera said he could get insurance, no problem, Fuller said. The premium would be $350 a month, rather than the $1,300 fee for a gold plan on the state insurance exchange. “And that was with dental, too,” he added.

Low premiums also attracted Bruzas, who left her well-paid government job in Tacoma, and the insurance it provided, after her husband died in 2015. She moved to a small town in southeastern Washington to care for her parents and went online to find health insurance.

“I just sat down and Googled ‘Obamacare,’” she said. “I got a call back from a lady who said she could help me find coverage.” Bruzas was charged $219 for the first month.

Four days later, she was in the local emergency room with massive rectal bleeding. As she was discharged, hospital officials said they had “never heard of Aliera Healthcare,” she said.

The Washington patients recalled mentions of “sharing” and vague references to spirituality. But none realized they were signing up for a religious cost-sharing ministry, they said.

“I would have hung up the phone if she would have said, ‘We’re a group, and we’ll review your records and pray for you,’” Bruzas said.

Aliera officials said they make the nature of their products clear.

It’s not clear how states can curb the new sharing ministries. If Aliera ignores his order, Kreidler said, he’ll seek a court injunction to force the groups to cease operations. But several states contacted by KHN said that because the ministries are not health insurance, state insurance officials don’t review or regulate them.

Some users of sharing ministries say the lower-priced products should be available for consumers who understand and accept the risks involved.

But consumers need to pay close attention to details when they sign up for any health plans, said Colorado Insurance Commissioner Michael Conway, who is investigating sharing ministries operating in his state.

“Ask if it’s actually insurance,” he advised. “Ask if there’s a guarantee of coverage. Get into the policy documents. Read the contract they’re agreeing to.”

North and South Korea joined forces to get their ancient wrestling tradition onto a U.N. list of cultural [...]

In Ryan Hatrick’s London kitchen, Prince William and his wife Kate smile from lined up royal-themed mugs, a [...]

Exclusive: In budget, Trump to ask Congress for $8.6 billion for border wall

President Donald Trump on Monday will ask the U.S. Congress for an additional $8.6 billion to help pay [...] Iran’s Revolutionary Guards have attacked positions of the Iranian armed opposition in the Kurdistan region of Iraq with [...]

Senior Democrats on Sunday accused embattled Virginia Governor Ralph Northam of being dishonest and urged him to resign [...] Importance of Networking for International Students in the US

The word networking can fall under two categories: Social and Business. Both are very important as it is [...]

The first major exhibition in more than a century of Spanish impressionist painter Joaquín Sorolla opens in London [...]

Firefighters were tackling a blaze on Thursday at Warner Bros studios north of London, where the Harry Potter [...]